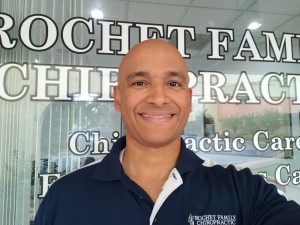 Dr. Romar Rochet graduated from Florida State University in 1999, with a Bachelors of Science degree in Human Science.  He has been in solo practice since 2008.

Dr. Rochet received his first chiropractic adjustment while in his last year of study at FSU and it changed both the trajectory, as well as the quality, of his life.  “I suffered from severe acid reflux and sinusitis every day.  After receiving my first adjustment at 21 years old, I was able to eat whatever I wanted without fear of the pain and burning from the reflux.  I was also able to breathe without restriction.  As someone who didn’t take any medication, OTC or prescribed, the chiropractic principles made a lot of sense and I felt like I found my calling.”

At that point, Dr. Rochet switched majors to focus on a chiropractic prep program to finish his Bachelors.  He attended Life Chiropractic College, in Marietta Georgia, from 2000 – 2001 and graduated from Texas Chiropractic College in 2004.  In 2007, Dr. Rochet returned to South Florida, where he associated with his mentor, Dr. Edwin Cordero, and has been in solo practice ever since.

Dr. Rochet began focusing on subluxation – based chiropractic care in 2008, applying adjusting techniques to focus on correcting the structural alignment of the spine.  “A well aligned spine produces a strong brain-body connection.  A strong connection produces health, from the inside out.”  Since 2008, Rochet Family Chiropractic has helped over 10,000 people correct their spinal subluxations, get off medications, avoid surgeries, and improve their overall quality of life.

Dr. Rochet is a Christian, a husband to a loving and supportive wife, and a father to 2 well adjusted children. When he is not investing time with his family or adjusting in the office, he golfs occasionally and trains for upcoming marathons.